2 Thess 2:11 is a very famous Bible verse where it speaks of STRONG DELUSION.

“And for this cause God shall send them strong delusion, that they should believe a lie:”

There are not many people who have tried to preach upon this verse, as it is very difficult to convey what the strong delusion will be like.

Alan Cairns is a highly regarded Pink Presbyterian “theologian,” he tried to deal with this, but he ended up making a fool of himself.

Many years ago he preached about the end-times, and he stated God would send a strong delusion, but just a few years ago he backtracked, and then said God does not delude anybody?

It is very hard to convey what the strong delusion will be like, but it is not very hard to give an example of what a delusion is.

A story appeared a few days ago in many MSM sources, which did not surprise me one bit.

It revealed that in the very Roman Catholic part of Germany, the authorities have ordered crucifixes and crosses to be displayed in all public buildings, naturally Antichrist gives his approval to all this carry on! 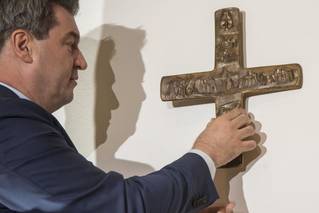 This is exactly what we need to illustrate what a delusion is.

Most people in the world today, deludedly think the cross is a Christian symbol!

The cross is NOT a Christian symbol and it never has been!

How are you supposed to create a symbol which accurately portrays a Spirit which no one has ever seen? Especially when the Bible forbids the making of such symbols which are intended for to be worshiped and bowed down to?

Whenever you see a website of a religious organization which has a “Cross” displayed on it, you know it is wise to give that organisation a very wide berth!

Whenever you see people parading about carrying “crosses,” you instinctively know it is very, very, wise to get as far away from them as possible.

You have to laugh at these deluded people. They claim they are going to combat “Islam” and all the other ills which afflict UK society, but in order for them to do this, they need you to send them as much money as you possibly can!!!

You can rest assured, if God ever genuinely raises up an individual or a group of individuals in the UK, to combat Islam and all the other ills in UK society, God will provide the necessary finance for them to do so!

They will not need to go about begging the general public to send them money!

Plus, if it so comes to pass, that the authorities put the people who God has genuinely raised up in jail, they will not be a bit worried about it. They will gladly go to jail in God`s will!

Hopefully, I have now given an illustration of what “a delusion” is like?