There is one piece of PPE which is indispensable, it is freely available, it is called the Imputed Righteousness Of Christ.

Once you have it you do not need to worry about any virus or any other threat to life.

2 Corinthians 5:21 For he hath made him to be sin for us, who knew no sin; that we might be made the righteousness of God in him.

Isaiah 5:20 Woe unto them that call evil good, and good evil;

that put darkness for light, and light for darkness; that put bitter for sweet, and sweet for bitter!

During the holiday period, my attention was providentially directed to a very interesting article on archaeology. 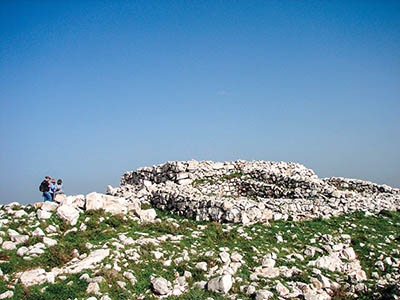 Site of the altar on Mount Ebal

It told how an archaeologist had discovered a site which fitted into the Biblical narrative.  The site was said to be the altar which Joshua had directed to be built on Mount Ebal.

Joshua 8:30 Then Joshua built an altar unto the Lord God of Israel in mount Ebal,

The majority of archaeologists do not like any findings which fit into the Biblical narrative or which remind them of the God of the Bible.

Have a happy 12th day everyone.

Here is some recommended reading for the holidays.

THE HISTORY OF PROTESTANTISM

Below is the closing paragraphs from the History of Protestantism, celebrating Williams ascent to the throne.

The throne being thus vacated, a Convention was held, and the crown was settled on the Prince and Princess of Orange. William ascended the throne as the representative of Protestantism. That throne, destined to become the greatest in the world, we behold won for the Reformation.

This was the triumph, not of English Protestantism only, it was the triumph of the Protestantism of all Christendom. It was the resurrection of the cause of the French Huguenots, and through them that of Calvin and the Church of Geneva. It was the revival not less of the cause of the Scots Covenanters, whose torn and blood-stained flag, upheld at the latter end of their struggle by only a few laymen, was soon to be crowned with victory. William the Silent lives once more in his great descendant, and in William III fights over again his great battle, and achieves a success more glorious and dazzling than any that was destined to cheer him in his mortal life.

Protestantism planting herself at the center of an empire whose circuit goes round the globe, and whose scepter is stretched over men of all kindreds, languages, and nations on the earth, with letters, science, colonies, and organized churches round her as her ministers and propagators, sees in this glorious outcome and issue the harvest of the toils and blood of the hundreds of thousands of heroes, confessors, and martyrs whom she has reared. One sowed, another reaped, and now in the accession of William III both rejoice together.

Hebrews 10:38 Now the just shall live by faith:

Am I the only one who suspects the DUP will do nothing to halt the Murder Inc and sodomania bill passing through the Westmonster political process?

Given the past machinations of the Duppers since approx 2006, nothing can be ruled out.

It would be most fortunate for them if they can say, “We voted against it BUT Westmonster went over our heads.”

Attempts by Jim Wells to strike a strident note against the Murder Inc and sodomania bill sound very hollow and carry no weight.

Ezek 22:30 And I sought for a man among them, that should make up the hedge, and stand in the gap before me for the land, that I should not destroy it: but I found none.

Willie Frazer`s death is a great loss to Unionism.

John 15:13  Greater love hath no man than this, that a man lay down his life for his friends.

Tumble Down Dick has thrown down the gauntlet to the BBC by challenging them to take their claimed evidence to the Parliamentary commissioner.

It will be a major embarrassment to the BBC if they fail to take up the challenge. I have not seen the Spotlight programme, so I have no idea whether their claims are accurate or not.

This latest instalment comes at the end of a bad new week for the Duppers, the week started badly with a story about the singing lounge lizard David Lundy Simpson MP. He is a prolific texter by all accounts.

Will the DUP scandals ever end? Rich men are in great peril but most of them never realise it until they have lost their soul.

Mark 8:36 For what shall it profit a man, if he shall gain the whole world, and lose his own soul?

The divinely inspired words of the 23rd Psalm are among the most well known pieces of literature in world history.

The most important word in the 23rd Psalm is the word “MY” as it is found in the first verse. “The LORD is my shepherd; I shall not want.”

It emphasises the importance of having a personal intimate knowledge of God, this is the most important fact in life especially when it comes to facing the possibility of death.

Little phrases and words from God`s scriptures are of great comfort to the families and friends, of loved ones facing death or serious illness, like the family of Willie Frazer at this present time, when the shadow of the valley of death  hovers near.

It is well known that Willie Frazer is a true believer and is known to the Good Sheperd.

1 ¶ « A Psalm of David. » The LORD is my shepherd; I shall not want.
2 He maketh me to lie down in green pastures: he leadeth me beside the still waters.
3 He restoreth my soul: he leadeth me in the paths of righteousness for his name’s sake.
4 Yea, though I walk through the valley of the shadow of death, I will fear no evil: for thou art with me; thy rod and thy staff they comfort me.
5 Thou preparest a table before me in the presence of mine enemies: thou anointest my head with oil; my cup runneth over.
6 Surely goodness and mercy shall follow me all the days of my life: and I will dwell in the house of the LORD for ever.

Ivan Foster has a very succinct article on his site about the death and funeral of an IRA terrorist, it is well worth a read.

It can be read at this link, POPERY IN THE RAW.

John 8:44 Ye are of your father the devil, and the lusts of your father ye will do. He was a murderer from the beginning, and abode not in the truth, because there is no truth in him. When he speaketh a lie, he speaketh of his own: for he is a liar, and the father of it.

The appointment of the first sodomite government minister in Israel is a very ominous development.

Before the end of this present evil age, we are told Jerusalem will be like Sodom and Egypt, that is the name given to it, in the 11th chapter of Revelation. 8 And their dead bodies shall lie in the street of the great city, which spiritually is called Sodom and Egypt, where also our Lord was crucified.

The growing influence of the sodomite movement in Israel, is a horrific wonder to behold. The country were you would expect least to find rampant sodomania, is in fact one of the worst countries in the world for it.

The great mystery to why the Holy Spirit called Jerusalem “sodom and Egypt” is no longer a mystery, we can watch the full development of it in our day and generation.

Revelation 11:1 And there was given me a reed like unto a rod: and the angel stood, saying, Rise, and measure the temple of God, and the altar, and them that worship therein.

2 But the court which is without the temple leave out, and measure it not; for it is given unto the Gentiles: and the holy city shall they tread under foot forty and two months.

3 And I will give power unto my two witnesses, and they shall prophesy a thousand two hundred and threescore days, clothed in sackcloth.

4 These are the two olive trees, and the two candlesticks standing before the God of the earth.

6 These have power to shut heaven, that it rain not in the days of their prophecy: and have power over waters to turn them to blood, and to smite the earth with all plagues, as often as they will.

7 And when they shall have finished their testimony, the beast that ascendeth out of the bottomless pit shall make war against them, and shall overcome them, and kill them.

8 And their dead bodies shall lie in the street of the great city, which spiritually is called Sodom and Egypt, where also our Lord was crucified.

10 And they that dwell upon the earth shall rejoice over them, and make merry, and shall send gifts one to another; because these two prophets tormented them that dwelt on the earth.

11 And after three days and an half the spirit of life from God entered into them, and they stood upon their feet; and great fear fell upon them which saw them.

12 And they heard a great voice from heaven saying unto them, Come up hither. And they ascended up to heaven in a cloud; and their enemies beheld them.

13 And the same hour was there a great earthquake, and the tenth part of the city fell, and in the earthquake were slain of men seven thousand: and the remnant were affrighted, and gave glory to the God of heaven.

14 The second woe is past; and, behold, the third woe cometh quickly.

15 And the seventh angel sounded; and there were great voices in heaven, saying, The kingdoms of this world are become the kingdoms of our Lord, and of his Christ; and he shall reign for ever and ever.

16 And the four and twenty elders, which sat before God on their seats, fell upon their faces, and worshipped God,

17 Saying, We give thee thanks, O Lord God Almighty, which art, and wast, and art to come; because thou hast taken to thee thy great power, and hast reigned.

18 And the nations were angry, and thy wrath is come, and the time of the dead, that they should be judged, and that thou shouldest give reward unto thy servants the prophets, and to the saints, and them that fear thy name, small and great; and shouldest destroy them which destroy the earth.

19 And the temple of God was opened in heaven, and there was seen in his temple the ark of his testament: and there were lightnings, and voices, and thunderings, and an earthquake, and great hail.