The appointment of the first sodomite government minister in Israel is a very ominous development.

Before the end of this present evil age, we are told Jerusalem will be like Sodom and Egypt, that is the name given to it, in the 11th chapter of Revelation. 8 And their dead bodies shall lie in the street of the great city, which spiritually is called Sodom and Egypt, where also our Lord was crucified.

The growing influence of the sodomite movement in Israel, is a horrific wonder to behold. The country were you would expect least to find rampant sodomania, is in fact one of the worst countries in the world for it. 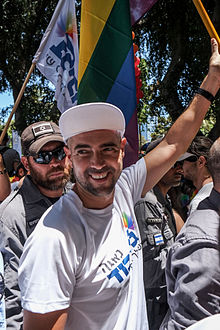 The great mystery to why the Holy Spirit called Jerusalem “sodom and Egypt” is no longer a mystery, we can watch the full development of it in our day and generation.

Revelation 11:1 And there was given me a reed like unto a rod: and the angel stood, saying, Rise, and measure the temple of God, and the altar, and them that worship therein.

2 But the court which is without the temple leave out, and measure it not; for it is given unto the Gentiles: and the holy city shall they tread under foot forty and two months.

3 And I will give power unto my two witnesses, and they shall prophesy a thousand two hundred and threescore days, clothed in sackcloth.

4 These are the two olive trees, and the two candlesticks standing before the God of the earth.

6 These have power to shut heaven, that it rain not in the days of their prophecy: and have power over waters to turn them to blood, and to smite the earth with all plagues, as often as they will.

7 And when they shall have finished their testimony, the beast that ascendeth out of the bottomless pit shall make war against them, and shall overcome them, and kill them.

8 And their dead bodies shall lie in the street of the great city, which spiritually is called Sodom and Egypt, where also our Lord was crucified.

10 And they that dwell upon the earth shall rejoice over them, and make merry, and shall send gifts one to another; because these two prophets tormented them that dwelt on the earth.

11 And after three days and an half the spirit of life from God entered into them, and they stood upon their feet; and great fear fell upon them which saw them.

12 And they heard a great voice from heaven saying unto them, Come up hither. And they ascended up to heaven in a cloud; and their enemies beheld them.

13 And the same hour was there a great earthquake, and the tenth part of the city fell, and in the earthquake were slain of men seven thousand: and the remnant were affrighted, and gave glory to the God of heaven.

14 The second woe is past; and, behold, the third woe cometh quickly.

15 And the seventh angel sounded; and there were great voices in heaven, saying, The kingdoms of this world are become the kingdoms of our Lord, and of his Christ; and he shall reign for ever and ever.

16 And the four and twenty elders, which sat before God on their seats, fell upon their faces, and worshipped God,

17 Saying, We give thee thanks, O Lord God Almighty, which art, and wast, and art to come; because thou hast taken to thee thy great power, and hast reigned.

18 And the nations were angry, and thy wrath is come, and the time of the dead, that they should be judged, and that thou shouldest give reward unto thy servants the prophets, and to the saints, and them that fear thy name, small and great; and shouldest destroy them which destroy the earth.

19 And the temple of God was opened in heaven, and there was seen in his temple the ark of his testament: and there were lightnings, and voices, and thunderings, and an earthquake, and great hail.