Before I go any further, I need to point out to overseas readers that a phony “peace-process” has been operating in N.Ireland for almost 2 decades.

Brian Rowan and Eamon Mallie have been two of the most ardent facilitators of this phony “peace-process.”

Indeed, it is safe to say the phony peace-process could never have gotten this far if it had not been for the critical support given to it by the MSM whores in N.Ireland.

If anyone cares to check the link to Eamon Mallie`s site they will see I have posted some questions which Brian Rowan should ask the new Secretary Of State, some character called Jimmy Brokenshire.

A snip-shot of two of the comments is below. 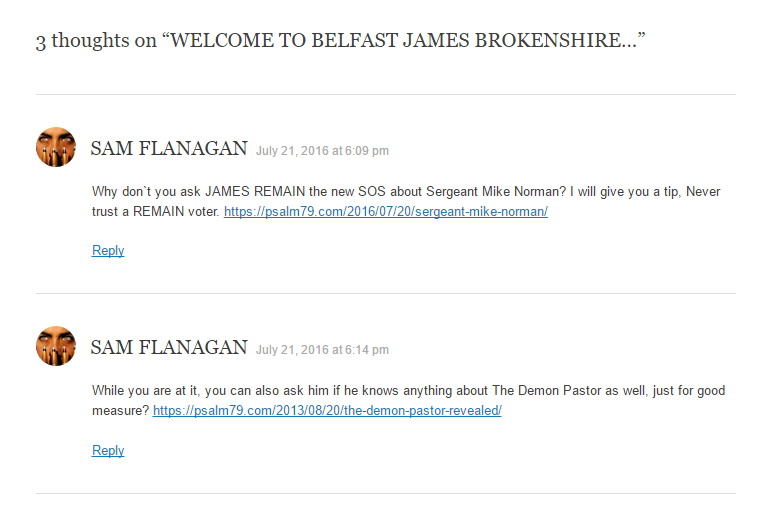 2  of the comments on Eamon Mallie`s site.

Jimmy Brokenshire is a “REMAIN” voter so the chances of getting the truth out of him is non-existent, though it would be amusing to see him squirm as such questions are thrown at him!

One comment I posted to Eamon Mallie`s site has not even been published! It says, “Your comment is awaiting moderation.”  A snip-shot of the comment is below.

It was also pointed out that the so-called “Demon Pastor” had been mentioned more than a few times at the HIA enquiry which has just finished.

Why would Brian Rowan and Eamon Mallie have a problem posting such a comment?

The Bible has a very vivid description of Spiritual and military watchmen who are entrusted with the solemn duty of guarding the inhabitants of a city or nation.

Unfortunately on this occasion it is describing watchmen who have treacherously deserted, turned traitor or abandoned their posts for one reason or another.

Isaiah 56:10 His watchmen are blind: they are all ignorant, they are all dumb dogs, they cannot bark; sleeping, lying down, loving to slumber.