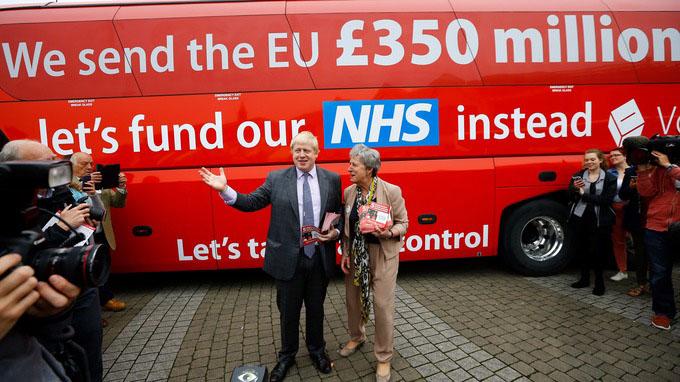 Apparently the “Leave Campaign” had claimed that the UK paid £350 million a week to the Antichrist`s EU?

As you might have gathered from earlier posts, I was not paying any attention to the campaigns being run by UK politicians about the EU referendum.  The Bible is the only reference I need to decide how to vote regarding the Antichrist`s EU.

Anyone who was relying on UK politicians from either the “Leave camp,” or the “Remain Camp,” to tell them the truth about the EU and it`s implications for the UK was certain to be lead up the garden path.

The UK government has had 2 days to leave the EU but they still have not left, why is it taking so long?

It is clear the “political elites” from both camps have been caught out.  The Vatican puppets like “Cocaine” Cameron who were running the “Remain campaign” never thought they were going to lose.

It is also clear the Vatican puppets running the “Leave campaign” never thought the were going to win!

Hence there was no “Brexit plan” drawn up by either side! The rogues of both camps have outsmarted themselves!

However the claim has been made, the UK pays the Antichrist`s EU 350 million a week, it is now time to unleash a plan by which the EU is forced to start paying the UK 350 million per week.

Such files will prove beyond all shadow of a doubt the total corruption, greed, criminality, sexual perversion and murderous nature which drives the EU.

They can say within 7 days we will make public just 10% of the intelligence files on “EU officials.”  If the EU does not start paying the UK  £350 million per week we will release another 10%, then another 10% and so on, until the EU gets the message, that the UK has left the EU  and the EU must now pay the UK large sums of money on a regular basis.

The EU referendum result of 24/6/2016 will only bear fruit when the 17,410,742 voters start to make it clear to the lying, cheating, conniving UK politicians, that they work for us, and that they serve us, and that they must do as WE SAY, not the other way round.

It is laughable to think that a large number of people in the UK actually think this clown is going to lead the UK to rebel against the EU!!! Boris is a clown, what is worse, he is a papal clown!

Just think, people spent hours listening to these “educated idiots” and watching the loony MSM in order for to find out which way to vote in the referendum.

All you needed to know was one Bible verse and you are on your way to the ballot box to vote the correct way.

Proverbs 14:34 Righteousness exalteth a nation: but sin is a reproach to any people.

The problem is, I have made my vote and now I am demanding my pound of flesh!

Here is an amusing story to finish with.

Howard Hunt was a rather shady, sinister American spook of some kind. Someone  once asked him how he had the brass neck to blackmail the President of the USA?

He replied, “That is not the question John. The question is: why is he paying?”

John Dean: Can I ask you a question? How the hell do you have the temerity to blackmail the President of the United States?
E. Howard Hunt: That’s not the question John. The question is: why is he paying?