VBC showed a documentary a few nights ago focussing on the impact of being the children or grandchildren or close relatives of convicted Nazi war criminals. It is available on iplayer. 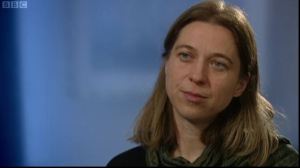 This is a great-niece of Henrich Himmler.  A great deal of interest still manifests itself  in the lives and evil doings of  Hitler and his henchmen. Sadly, very little attention is paid to the fact Hitler and his accomplices were the invention, product and pawns of the  greatest murder machine on the face of the earth, the Antichrist`s Babylonian Roman Catholic Church.

Now the VBC can add a new dimension to this whole topic by tracking down the descendants of all the high-ranking CIA officers and British Intelligence officers who helped Nazi criminals to escape retribution for their crimes.  Only a small percentage of Nazis were prosecuted, many of them were deemed to be too useful to the USA and Britain, so they were looked after.

I wonder how their descendants feel about being descended from monsters who aided and abetted other monsters to do the dirty work of the Babylonian Roman Catholic Church?

Revelation 17
1 And there came one of the seven angels which had the seven vials, and talked with me, saying unto me, Come hither; I will shew unto thee the judgment of the great whore that sitteth upon many waters:
2  With whom the kings of the earth have committed fornication, and the inhabitants of the earth have been made drunk with the wine of her fornication.
3  So he carried me away in the spirit into the wilderness: and I saw a woman sit upon a scarlet coloured beast, full of names of blasphemy, having seven heads and ten horns.
4 And the woman was arrayed in purple and scarlet colour, and decked with gold and precious stones and pearls, having a golden cup in her hand full of abominations and filthiness of her fornication:
5  And upon her forehead was a name written, Mystery, Babylon The Great, The Mother Of Harlots And Abominations Of The Earth.
6  And I saw the woman drunken with the blood of the saints, and with the blood of the martyrs of Jesus: and when I saw her, I wondered with great admiration.