For a few days now, Stephen Nolan has been implying there is some sort of convulsion taking place within the DUP.

This is due to the fact they have chosen to run a self-confessed lesbian as a candidate for next week`s council elections.

The scenario is compounded by the hysterical reaction of Jim Lundy aka Jim Wells to the situation. You can listen to Jim Lundy at this link.

People can make their own minds up as to what is going on within the DUP, however I would suggest there is a more important scenario to watch, in order to gauge what is happening.

Pink Presbyterianism is where the future of the DUP will be decided in my view. Ivan Foster has already lambasted the DUP over the issue, plus he has also lambasted David McIllundy aka David McIlveen, for his wishy washy stand on the matter. 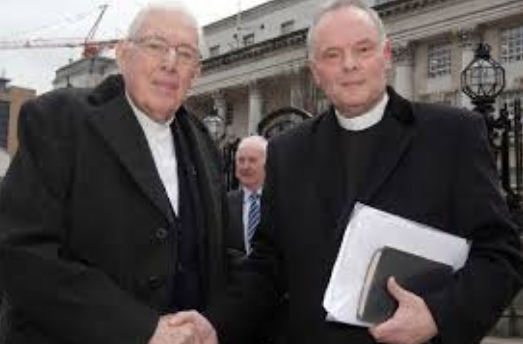 The public should be aware that David McIllundy is now a NOBODY in Pink Presbyterian circles, he has had to apologise within the denomination for all the damage he did, when he was Ian Paisley`s lapdog.

The public should also be aware that the Pink Presbyterian denomination has very little credibility, due to it`s failure to make a clear public declaration that none of its ministers have a SUPER INJUNCTION, and none of it`s ministers have been cavorting about with “rent boys” in London or anywhere else! Willie McLundy in particular!

They have had almost 10 years to deny the fact Willie McLundy has a SUPER INJUNCTION and they have failed to do so!

As a footnote, Ivan Foster does not seem to believe Lyra McKee`s claims that she was in a “gay bar” with a young Pink Presbyterian and his mother!

Here is some music from Willie.

My friend in a minister the the Hillsborough Pink Presbyterian Church, I must send this article to him.

I usually use pictures in my articles, I will add them later.

Isa 66:4 I also will choose their delusions, and will bring their fears upon them; because when I called, none did answer; when I spake, they did not hear: but they did evil before mine eyes, and chose that in which I delighted not.