Quite a few internet sites and sources, are now pointing out the fact that the news about the Telford sex abuse story, is largely going unreported by most of the UK MSM?

This particular linked article is asking the question, is it because the victims are the wrong kind of victims?

The victims are largely white and working class.

Almost all the UK MSM seem to be too frightened to say anything about the evil nature of Islam, lest they draw the wrath of the Muslim adherents?

Islam does not bring any benefit to any nation, locality or community where it rears it`s monstrous head.

Those “Historic Protestant Nations” around the world who have embraced the folly of Islam within their borders, will pay a heavy price for their wicked decision.

A few days ago I saw a satirical cartoon which sums up the attitude of the UK`s political establishment as far as Islam is concerned. It is below.

As long as the UK political elites can make money from Islam they are happy. Today`s “Islamic friend” can become tomorrow`s evil terrorist enemy, when the right financial conditions apply! 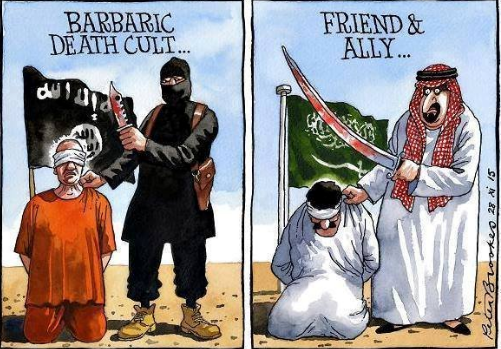 As long as the UK political elites can make money from Islam, they are happy.

2 Timothy 3:12 Yea, and all that will live godly in Christ Jesus shall suffer persecution.