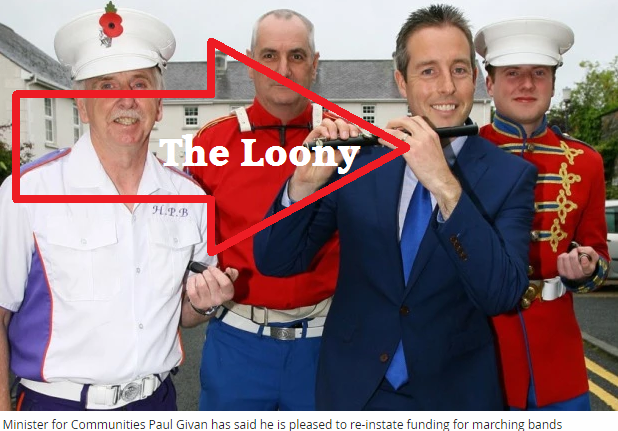 Spot the N.Irish Loony is well worth a second look.  It looks very like Paul the Loony Lundy Girvan, has by his boasting, sodomised his fellow DUP traitors, metaphorically speaking that is.

In a vain attempt to make himself popular with the marching band fraternity, Paul has made great play of the fact he was able to make sure £200,ooo was being set aside for “marching bands.”

Now he has just done the same thing regarding boxing, once he realised how popular all this benevolence makes him.

Unfortunately his fellow colleagues had been using the excuse that they did not have the power to allocate funding to particular groups, in order to save their blushes when it came to funding sodomite groups.

Paul has neatly skewered his hapless party colleagues with his egomaniacal  antics, naturally none of this has went unnoticed, as you can find by reading this link.

Looks like the Pink Presbyterians and the Kincora Old Boys Association have all been left pink faced?  Well done Paul!

Proverbs 3:35
The wise shall inherit glory: but shame shall be the promotion of fools.
Proverbs 11:2
When pride cometh, then cometh shame: but with the lowly is wisdom.
Proverbs 13:5
A righteous man hateth lying: but a wicked man is loathsome, and cometh to shame.