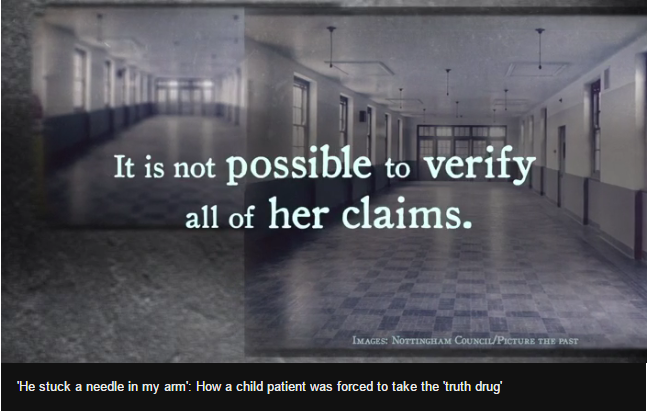 This is another article I meant to finish last week but did not get around to it. Just finished listening to the whole programme from the Radio 4 archives.

It is well worth a listen, as it reveals the possibility of people being seriously damaged, due to seemingly untouchable individuals in the medical profession conducting sanctioned or unsanctioned “medical experiments.”

The programme makers make clear they cannot verify all the claims of one woman, which is most likely the case, largely due to the passage of time.

The most infamous case of “medical experiments” on patients took place in Canada, and it has been admitted it took place at the behest of the CIA.

Naturally when something so grotesque as this happens, you invariably find the CIA at the core of it!
It all started when American powerful elites got it into their heads that the North Koreans were “brain-washing” captured American service men.

News items began to appear on USA news programmes showing captured GI`s denouncing the USA government and the Korean war. The powerful elites could not believe that true blooded American GI`s would ever commit such a treacherous act, it could never happen, so they concluded the North Koreans had some fiendish way of “brainwashing” true blue GI`s, rendering them traitors and a threat to the Korean war itself.

Obviously there was no such brainwashing. All the North Koreans had to do is put a captured GI in front of a TV camera and tell him, if he does not say what is written down for him to say, they would shoot him dead.
It may even be the case that they first shot some poor, helpless GI dead, right in front of the individual they had chosen to make the propaganda broadcast, in order to prove to him they were not bluffing.

Such a technique of demonstrating imminent death, would be a more powerful influence than any imaginary brainwashing technique.

Anyway, this is how the whole MK ULTRA project got rolling.

Anyone who is interested in finding out more about the horrifying experiments and the helpless and hapless victims will find this book a very useful source.

It also reveals the evil individuals who were pulling the strings of the whole operation, they found Ewan Cameron a willing apparatchik to do their dirty work, while they themselves kept their hands clean.

Naturally you will find lots of information freely available on the internet, all you have to do is google “MK ULTRA.”

Jeremiah 17:9
The heart is deceitful above all things, and desperately wicked: who can know it?