Since the Referendum on the 23rd June 2016 and the fall out from the result, there has been nothing but confusion in the UK political realm as to what will happen next.

It have absolutely NO confidence in any of the UK political parties or UK political personalities, and I am 100% confident that none of them have the backbone to take any political action which will lead to a decisive, clean, clear break with the EU.

To take the matter further, it is now very, very obvious if the matter is left up to the UK political parties, we will never leave the EU.

On the Leave.EU  Facebook page, they have endorsed some guy called Stephen Woolfe as the next UKIP leader. I have no idea who he is, or what his background is, and I have no intention of joining UKIP either.

What I did do, is leave the following comment on the Leave.EU page. 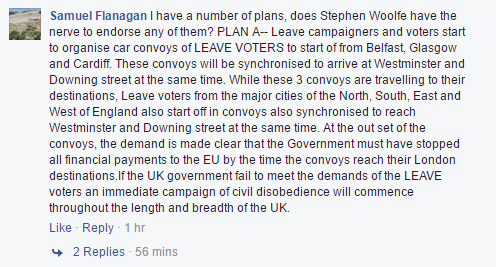 I will guarantee you Stephen Woolfe will not have the backbone to endorse such a plan and neither would any of the other UKIP leadership challengers.

The Kincora Old Boys Association would not have the backbone to endorse such a plan either, and neither would the TUV.

Nevertheless, I am 100% confident that Northern Ireland, Scotland, Southern Ireland and Germany will all be leaving the EU at some point in time. Maybe sooner than most people think!

Daniel 2:45 Forasmuch as thou sawest that the stone was cut out of the mountain without hands, and that it brake in pieces the iron, the brass, the clay, the silver, and the gold; the great God hath made known to the king what shall come to pass hereafter: and the dream is certain, and the interpretation thereof sure.