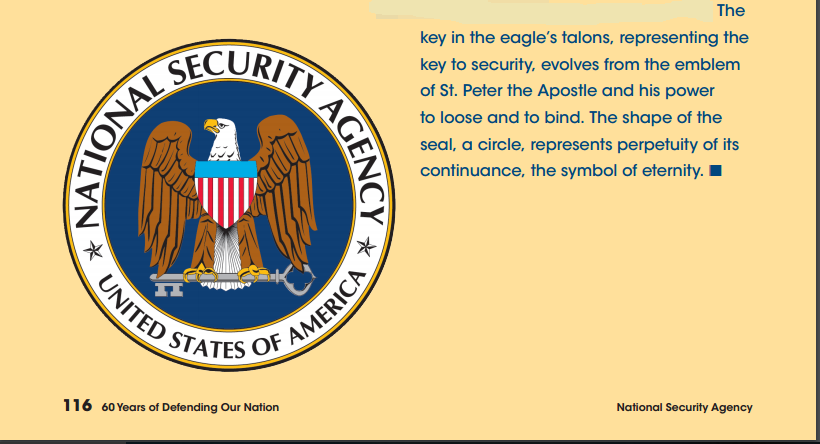 The picture above shows the insignia of “The National Security Agency.”  If you examine the picture, the silver key in the claws of the eagle stand out.

“The National Security Agency” itself explains the symbolic meaning of the silver key, they claim it is the emblem of St Peter the Apostle.  The true Apostle Peter did not have an “emblem.”

What they really mean is, “it is the emblem of the Pope Of Rome,” and what is more, that is who the NSA and all the other security arms of the USA exist to serve, they serve the Pope Of Rome and they further his interests all around the world.

The picture above is taken from the the 60th anniversary brochure of the NSA. You can see it on page 119 of the PDF file at this link. NSA 60TH Anniversary.

They should have titled it, “Faithfully serving the Pope for 60 years.”

The Vatican flag is below, note the two keys, silver and gold.  They symbolise his claim to to be the only legitimate ruler on earth in the temporal and spiritual realms.

You have to laugh at people who think the American authorities are going to genuinely investigate the Nama scandal???  There is no chance.

Cerberus are just another arm of the Pope`s carpetbagging industry, everybody involved in it has a licence to steal everything and anything, as long as they faithfully serve Antichrist!

Isaiah 66:4  I also will choose their delusions, and will bring their fears upon them; because when I called, none did answer; when I spake, they did not hear: but they did evil before mine eyes, and chose that in which I delighted not.
2 Thessalonians 2:1  And for this cause God shall send them strong delusion, that they should believe a lie: