Two stories have appeared in the Belfast Telegraph in the last two days and they both relate to Kincora.

One story tells of a “Top Tory Perv” who is now dead, but when he was alive he visited Kincora.

How is it that all these police officers have remained silent for so long? Are they all thick or what? Are they worried about their pensions? Or have they all been frightened of falling foul of MI5?

The other story tells of British army personnel ferrying a “Top” MI5 officer to Kincora.  I do wish Brian Gemmell and Colin Wallace would just publicly reveal everything they know, somehow I do not think the so-called “Official Secrets Act” has very much credibility in the UK anymore?

Naturally the week cannot end without some mention of Leon Brittan in the UK MSM, he was a “Top Tory Perv” and he is getting a mention in tomorrow`s newspaper. 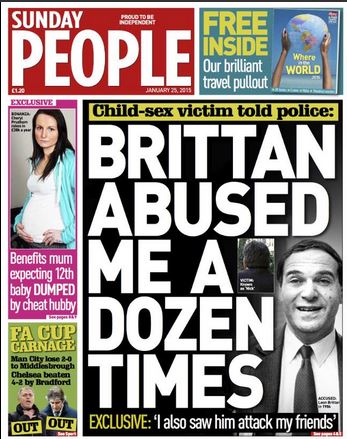 The UK truly excells in one sphere of sophistication, covering up for the “society elites.”  Can any other nation do it better?

Micah 7:3 That they may do evil with both hands earnestly, the prince asketh, and the judge asketh for a reward; and the great man, he uttereth his mischievous desire: so they wrap it up.