Now all this has been established, the guessing game as to the identity of the latest SUPER INJUNCTIONATTI can begin!  First of all you must remember even though they have been obtained in N.Ireland it does not mean the publicity shy new owners are from N.Ireland or live in N.Ireland.  They could be from any part of the country.

They could be from London, from Downing st or somewhere close to Downing st?  They could be Westminster MP`s?  They could be members of the Cabinet?   Just think it could be someone in the UK government who may be open to blackmail from hostile foreign governments?  The fact some government minister is involved in a scandal is bad but the fact they tried to cover it up makes it much, much much worse.

Could you imagine the fun you could have if you had the information to bring down the present government? Just imagine if J118 and Peter had the low-down on members of Cameron`s cabinet, they could obtain billions for REAL job creation opportunities??????   Unfortunately it would not work for J118 and Peter, they could not blackmail Cameron. If they tried such a stunt, within an hour stories would be appearing in the UK MSM saying, “J118 has been a British agent for the past 40 years!  He also HAD a machine gun on Bloody Sunday and here are the pictures to prove it. Not only that, here is the proof he fired the first shots on Bloody Sunday!”

God only knows what would be revealed about Peter, his dysfuntional family and his greedy cronies, plus all the perverts in the Kincora Old Boys Association would be outed, especially Jeffrey and Willie!!

The moral of the story is; Anyone who tries to expose the Super Injunctions in the UK better have clean hands themselves!! This means none of the current crop Westminster MPs are going to reveal anything.

Perhaps Stephen Nolan will tackle the Super Injunction story on his radio show? Do you think he will? It is hardly likely seeing he has one himself!!!! lol lol lol

What a state the country is in, the UK general public potentially have the power to bring down the present UK government with the the judicious use of social media, all it takes is a careless twitter or two.  Every foreign head of state at next weeks G8 meeting will know all the scandal about the latest Super Injunctions but the UK public must be kept in the dark.  David Cameron needs to issue a statement saying, “No members of the current government have Super Injunctions,”  do you think he will ?

Psalm 24:4 He that hath clean hands, and a pure heart; who hath not lifted up his soul unto vanity, nor sworn deceitfully.

Someone is running an amusing Twitter account by the name of  “The Equalizer.”  He/she/it seems quite happy to expose the SUPER INJUNCTIONS.

The amazing thing about this tactic is the little fact is guarantees you immunity from the authorities. If they close down your account, blog or Facebook page for exposing SUPER INJUNCTIONS, it merely confirms in people`s minds that all the allegations are true!!

Proverbs 28:1 The wicked flee when no man pursueth: but the righteous are bold as a lion. 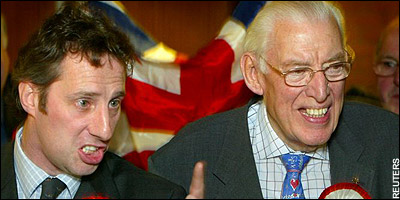 Lo and behold, we now have her brother, TumbleDown Dick Lundy has now discovered IRA/MI5 are involved in “criminality!”   What a surprise!

However, it looks like he is conveniently  forgetting it was not so long ago he was happy to be in government with these very people. To make matters worse he was boasting to all and sundry the DUP had shackled IRA/MI5 into a life of British rule and support for law and order.

Jim Allister has reminded him of his past follies.

It looks like the entire Paisley family are living in a constant state of serious denial about their past. However, it is clear the Paisley family would take great delight in Peter Punt`s downfall and are even doing their bit to bring it about.

This one just one more reason why the PEACEFUL PROTESTS should be stepped up.

VBC media whores again refuse to talk about Super Injunctions! They actually ran away!  The video is below. Time to make sure NO VBC media whores are are ever allowed into any “UNIONIST” areas ever again. Total scum.

Plus here is a nice video for all the VBC media whores. Remember Jimmy Saville, you peado protecting, pervert protecting bunch of liars!


Rev 21:8
8 But the fearful, and unbelieving, and the abominable, and murderers, and whoremongers, and sorcerers, and idolaters, and all liars, shall have their part in the lake which burneth with fire and brimstone: which is the second death.
0.000000 0.000000

Here is a video clip lampooning Peter Punt`s Lundy forum.  Peter is the “Not So Smooth Operator.”

Psalm 64:2 Hide me from the secret counsel of the wicked; from the insurrection of the workers of iniquity:

It is incredible to believe this I know but the PEACEFUL PROTEST MOVEMENT has been given priceless publicity over the last two days from the Belfast Telegraph.  Instead of playing down the protests and side lining them the MSM scum have played into the hands of the Protestors.

Just imagine the amount of money the protestors would have needed to publicly announce the City center protest for this Saturday and the bigger protest on the 11th?

Thanks for all the FREE publicity, SUCKERS!!

Yesterday the Telegraph featured the Loyalist LAUGHINGSTOCK Jackie McDonald, the interview was conducted by the loathsome Liam Clarke. Who in their right senses would listen to anything concocted by those two?

McDonald has said the “Unionist” politicians should tell the protestors the truth, that the protests alone will not get the flag decision reversed!!!!

This is excellent stuff, there is a “Traffic Light Tea Party” planned for Friday night in the Tigers Bay area, it would be great if we could get any of the elected representatives for the area to come along and tell the PEACEFUL PROTESTORS that the protests will not work, I would look forward to the spectacle!  So if anyone can contact Nigel or Nelson or any of the others to come along please do.

By  the way I have invited a certain Nuala McKeever to come to the Traffic Light Tea Party and provide the entertainment, you can see my invitation in the comments below her latest article.

The latest gibberish from todays Telegraph I cannot comment on as it is not available online yet, thanks again for all the FREE publicity SUCKERS as far as I can tell there is about three pages of it!

Looks like MI5 are loosing their touch, they just don`t seem to be able to contain things the way they used to do.

Who really knows what will happen? After all Jackie McDonald and his cronies have said the protestors are running about like “headless chickens.” Imagine having Jackie McDonald as a Facebook friend??????????? lol lol

Proverbs 27:1 Boast not thyself of to morrow; for thou knowest not what a day may bring forth.

This is the second MSM whore from “the going out of business” Belfast Telegraph who has become ultra paranoid about the activities of  “Creationists.”

I suspect Liam Clarke is going to have lot more to worry about than he ever bargined for!

My dog is called Caleb!

Proverbs 1:26  (1611 King James Bible) I also will laugh at your calamitie, I wil mocke when your feare commeth.

At least two local media whores seem to have fallen victim to some kind of strange paranoia.  One unnamed individual is described as being “threatened by a loyalist organisation.”   The organisation now denies any threat.

Another local media whore who goes by the name of  Finola Meredith seems terror stricken at the thought Ken Ham is going to take over the world.

“The truth is that the creationist lobby, both here in Northern Ireland and around the world, is increasingly politically powerful. These are the kind of guys you need to keep a very close eye on. Don’t think for a moment that they’re going to stop with their small victory at the Giant’s Causeway.”

This article will have you laughing your head off.  It is written by that idiot Henry MacDonald. I am sure you have noticed how the local MSM have done more than their fair share of lying  in trying to convince the public there is a REAL “Peace process” in N.Ireland, judging by McDonald`s article the media whores don`t even believe their own lies!! lol lol lol lol  Most of them are just a bunch of drunken liars!

“Despite the peace process, a number of journalists still live under a tight security regime with CCTV cameras around their homes, alarm buttons positioned in different parts of their houses and drop-bars on their front and back doors.”

It is no wonder local MSM whores are regarded with contempt when you read their pathetic drivellings.  There is not one newspaper in N.Ireland worth spending money on!

This is what Meredith is frightened off !!!!!

Psalm 53:1
The fool hath said in his heart, There is no God. Corrupt are they, and have done abominable iniquity: there is none that doeth good.

According to some MSM commentators this legal case could prove to be the most controversial ever in the UK.   Much of the the hype is based upon the speculation security service “Handlers” could eventually face prosecution.

I am very sceptical about this possibility, no doubt plans are well advanced to ensure this never happens, even if they have to murder  1 or 2 or even more people to make it certain it never happens.

No doubt the proceedings will make very interesting reading as it goes its merry way.

Proverbs 13:15
Good understanding giveth favour: but the way of transgressors is hard.

Please read this article and ask yourself if there is at least one very paranoid person in Turkey?

Isaiah 66:4
I also will choose their delusions, and will bring their fears upon them; because when I called, none did answer; when I spake, they did not hear: but they did evil before mine eyes, and chose that in which I delighted not.